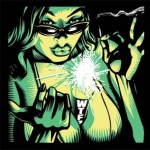 For the latest KMFDM release, band leader Sascha Konietsko and I came up with this enticing but dangerous femme fatale within whose tempting assets destruction awaits.

Coincidentally, I had been musing on the way women’s faces, lit from beneath by the light from their mobile phones,  resemble those Renaissance paintings of  Madonnas  and the placement of the sparkling fuse in the artwork adequately conveys this flushed, angelic look (even though its source is threatening).

Several alternative colour combinations were suggested before agreement was made on the featured green and yellow.

I was asked by Sascha Konietsko of KMFDM to come up with a band illustration for their new album, Krank. Using several photos of the band onstage from their last tour, I spent a couple of weeks sketching the various members before building the scene in 3D and lighting it accordingly.

I then inked the individual characters before scanning them in and finishing off in Illustrator.

Details of the new album here

Recently received this pic from a fan. Thanks Mary. 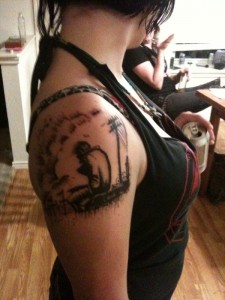 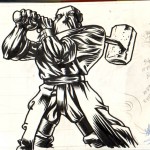 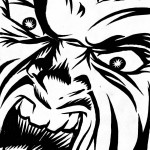 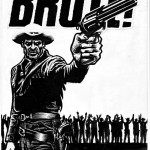 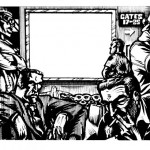 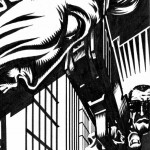 Over the last few months, I have been able to amass dozens of rare original ink illustrations dating from the early 90s to the present day and I am pleased to announce their sale here on the blog.

Included in the sale are rare and unseen KMFDM concept art, original draft illustrations, animation storyboards and frames plus original BRUTE! pulp covers and vintage advertising artworks. Ranging in price from 50 to 500 euros, each one is a collector’s item, signed by Aidan Hughes.

To explore the current collection, please refer to the ‘Inks’ section of our Products page. 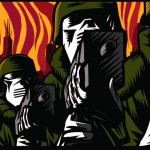 A remixed artwork for a remixed album, KMFDM enabled me to re-vectorize this still from the Sonofagun video for their latest release. 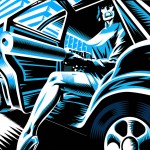 Every once in a while, I get the opportunity to re-render one of my old illustrations.

A Drug Against War was one of my first sleeves for KMFDM and when I asked the band for a high-res copy of the sleeve, they were  only able to supply me with a heavily-pixellated version. So, using Illustrator, I painstakingly reproduced the artwork with clean and minimalist vectors, keeping as close as possible to the original.

I am offering this beautiful A0 canvas print for the special price of 560 euros.

(see in the Products shop for details)

During my long-postponed visit to the UK this month, I came across a number of original artworks. 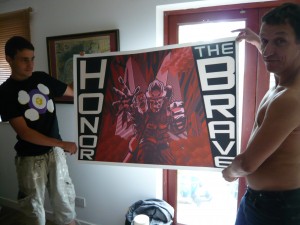 I will be auctioning many of these rare items on eBay in a month or so, so please keep watching this space.

Please contact us at bruteprop@gmail.com for samples and inventory or go here: http://www.theultraheavybeat.com/forum/viewtopic.php?t=2995 A very old KMFDM rough that was never used. I think I then re-adapted it for use as a magazine cover.

Thanks to Alan Charness for posting this.