Back in the early 90s, I was commissioned to illustrate Warner Music’s catalogue. I was pretty much burned out doing these film noir gumshoes so I hesitated at first but eventually capitulated when writer Ian Dewhirst added more characters.

Despite some negative reactions from the suits at Warner’s, it went on to win a D&AD advertising award for Best Corporate Campaign. 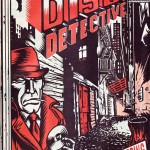 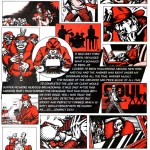