Short mini-documentary on the BRUTE! Popaganda show in Prague this month. Film maker Rory Wilmer and I spent the day walking and drinking along the river Vltava and discussing my work. Also contains scenes from the opening of the show at Mad Bar which features a short speech by yours truly on Popaganda reproduction.

I was sitting in the other room when this came on and when I heard Keifer Sutherland’s turgid tones, I decided to stay away. But within ten minutes, I could tell, by the music and the super-caffeinated acting style, that the Wild was some sort of CGI animation made for four-year olds. I was right.

When you’ve watched (or heard) as many bad movies in one 24-hour period as I have, something begins to dawn on you: you realise that you’re living in one of the worst periods for movies made by Hollywood; that you’re cinematic habits revolve around a steady diet of films made in Asia; that leading men all look like deranged retards or public schoolboys; that kid’s films cannot be watched by adults anymore.

With a sigh, I slip a copy of Chinatown into the DVD and press PLAY.
Finally, my eyes, ears and brain are doing something worthwhile.

This movie was made for eight-year olds but everyone in it acts about two years younger.
It’s supposed to be about a trio of losers and retards that win a bunch of baseball games but what it’s really about is poo, wee, farts, noogies, wedgies, potty words and humiliating the very people it claims to defend: nerds, retards, midgets, losers, blimps, wimps and gays. There was one good joke which will give you a flavour of the sort of humour to expect: the kid from Napoleon Dynamite throws a rock at the guy from Deuce Bigelow which goes into the whirling blades of a lawnmower which then shoots out the other side into another bloke’s bollocks.
The rest was predictable rubbish, even for kids..

Adam Sandler must die. If I see another ‘bad dad working too hard and never seeing family’ movie, I’m going to chop off an ear. This is so bad, it had me thinking: how did the cast and crew summon up the will to come into work every day? Who looked at the script and said; ‘I think this will be a great movie?’ They should be sacked. 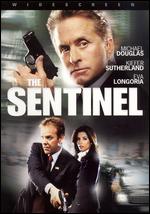 Michael Douglas plays an ageing Secret Service man caught up in a plot to kill the President whose wife he’s shagging. That’s it. Mike looks like his botox got caught in his razor. The left side of his face is constantly in shadow and his running scenes are done by a stuntman wearing a digital head. Just as well, as running is the only thing that happens in this film. There’s a bit of shooting at the end but who was doing it is still a mystery to me. On the other downsides, Keifer Sutherland seems to be in competition with Owen Wilson for this years’s Most Inaudible Actor award and Eva Longoria is only four inches taller than her action figure.
Crap.

This has to be one of the worst movies I have ever seen. Its about a group of teenage lads from this town in New England who are all related to witches. They have this cool power which can kill them if they use it so they try not to use it too much. How much fun is that? For the first bit, they just cruise around doing teenage-type things like drinking in bars, dancing, fighting, arguing etc. But then you begin to notice a couple of things: why, for example, are all the blokes ripped; why are they always wearing vests or naked in the showers; why does the camera pan away or fade out every time one of the lads kisses a girl? Yes, it was a gay movie. Apart from that, there was no action or plot just loads of talk about the Power and how it was going to rule at some stage. At the end, another rent boy who looked like Pete Doherty on steroids steps up and gets his butt kicked, just as I was about to do the same to the TV. The Power is, basically, just bubbles of transparent stuff that they fire at each other when not pouting.
After the debacles that were Cutthroat Island, Deep Blue Sea and Cliffhanger, you’d think Rene Harlin would know by now when he’s making a stinker. It just goes to show that the old adage that ‘you’re only as good as your last film’ is inaccurate. In this movie’s case, make that wildly inaccurate.

Let me be clear, I don’t really rate Bill Murray and I never have. I despised his smug insouciance in Ghostbusters and his new incarnation as the King of the Indies hasn’t lifted my skirt a pleat. From Groundhog Day and Rushmore to The Life Aquatic with Steve Zisou and Lost In Translation, his monosyllabic, world-weary acting style makes deciphering his humour a microscopic knack. Now, we have a film that is so laid back, soooo inanimate, it supports Bill’s almost acting/awake style perfectly: it’s like watching two blobs of Marmite race down a diagonal wall of glue.
The movie opens and the camera drifts like a bad smell into Bill’s house. He’s Don Johnstone (a lame gag that is repeated ad infintum with diminishing results), an old roue who has made a lot of money from computers. He receives an anonymous letter from an old flame informing him that the son he never knew is out looking for the dad he never knew – Don. Don Johnstone( zzzz )’s next door neighbour, Winstone, suggests going round to all the women he fucked during the alleged period to check them out. Don can’t be bothered: he doesn’t think it’s a good idea; he reckons it’ll be a waste of time. An hour into the movie, I was inclined to agree with him on all three counts, but no: Jim Jarmusch decides we are all going on this boring road trip to places where nothing happens even though Sharon Stone, Jessica Lange, Tilda Swinton and Chloe Sveigny are among the female stars bafflingly attracted to him (Don). It’s like a detective film that can’t be bothered to be a part of the surroundings. We’re not supposed to care, is that it? Are we supposed to find this appealing? Quirky? Maybe it’s one of those films that explain to us morons exactly how hum-drum and commonplace our miserable lives are by exploring the interminable ennui of human existence that lies beneath the surface of our boredom. Maybe an idea that would have been better suited to radio. Hospital radio.
JIm Jarmusch has made some great films: Dead Man, Down by Law and Ghost Dog spring to mind. But this fucker is a dead dog of a private joke. And its so bad, it encourages video piracy.

Wasted Hours, I think would be more appropriate.
2/10
P.S. One good thing about the movie is the soundtrack by Ethiopian musician Mulatu Astatke (http://www.rottentomatoes.com/p/mulatu_astatke/).