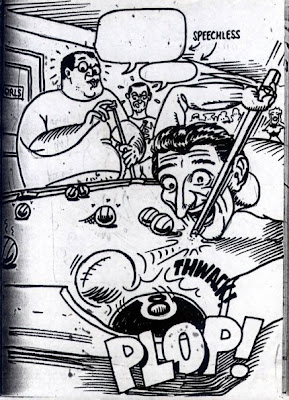 Way back in 1993, I was in Chicago, art directing the KMFDM animation ‘Drug Against War‘ at C-Pop studios. In one room, the techies slogged (doing the animation tweening and compositing) and, in another, much sweatier room, I worked night and day with the cel animation team or ‘inkies’, as we called ourselves.
To keep spirits and morale up, the team and I engaged in Art Wars: denigratory and derogatory cartoons aimed at humiliating the other animators. Pretty soon, we had a huge wall covered with these gems and I am proud to present, courtesy of ace draughtsman, Peter Moriarty (who also worked with me on ‘Sonofagun’ and the ZPC: No Flesh Shall Be Spared game for Zombie Interactive), one of the best. In between our punishing 36-hour shifts, the team shared a love of pool which we indulged in in bars such as McNeill’s and Hoilday in the city’s Wicker Park area.
Here is one of the crowing cartoons I posted one day after a typical trouncing on the green baize.